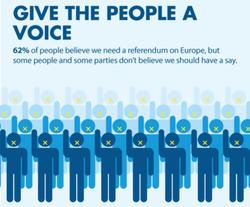 Many of you may be aware that I have always been Euro sceptic in my political principles and have strongly believed that the British people should have their say on our membership of the European Union. I have already voted in this Parliament to hold a referendum as soon as possible, and only recently I backed an amendment to the Queen’s Speech expressing regret over the lack of an EU Referendum Bill in the Government’s legislative programme. I reiterate my very simple position – the people deserve a say on this question.

I was delighted when the Prime Minister promised this country that an in/out referendum would be held by 2017 if a Conservative majority was in power and I fully support the Private Members Bill that has been brought forward to ensure that the legislation is in place for 2017.

Also for the first time, the public can sign up as co-sponsors, through www.letbritaindecide.com or, if you use Facebook, www.Facebook.com/LetBritainDecide. David Cameron and William Hague were among the first to sign up on the internet as co-sponsors of the Bill. I have already signed up and I would urge you to join me by signing up as soon as possible if you believe you deserve a say on our membership.