Success! Appeal for giant wind turbine on the edge of York is rejected. 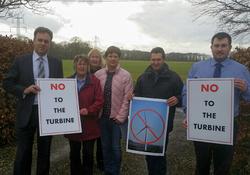 The long running campaign to stop a 78 metre wind turbine from being built near Kexby has ended in success.

Welcoming the announcement, Julian said “For over a year local residents have had the fear of a giant wind-turbine in their back-yard hanging over them. I am delighted that today’s ruling will mean that they can now stop worrying and can get on with their lives.

“I am pleased that we now have strong laws in place to prevent windfarms being built against the wishes of local communities. This was one of my key priorities and it is fantastic news that residents now have a final say over such applications.”

The Planning Inspector cited three grounds for refusing the appeal. It was felt that the turbine would have been harmful to York’s surrounding Green Belt, which was not outweighed by any other special considerations. It was also held to be inappropriate development which would have a harmful impact on the surrounding landscape, and would also have a direct and detrimental impact on local views.

The Planning Inspectorate also decided that it was clear that the turbine did not have the support of the local community. The development only received four letters of support against over seventy objections from members of the public, including from Mr Sturdy as well as the Kexby and Dunnington Parish Council.

The appeal was also against Government policy. It was a key commitment in the Conservative manifesto that local people should always have the final say on wind farm applications. The Inspectorate found this was clearly not the case and so rejected the appeal.

Julian is a member of the House of Commons Energy and Climate Change Committee and has also successfully campaigned to end the lucrative subsidies that were previously awarded to all onshore wind farms.

Pictured: Julian campaigning with local residents against the wind turbine