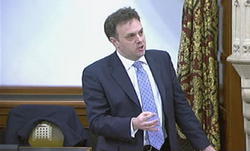 Last week in Parliament the Minister of State for Skills, Nick Boles MP, addressed the All Party Parliamentary Group for Rural Business, of which Julian is the Chair.

The Minister also announced that he would be willing to change the way apprenticeships are run in order to encourage more involvement in seasonal work, such as in the hospitality and horticulture industries. Julian is now working closely with the CLA and the NFU to help the Department for Business to pilot a new type of apprenticeship that will allow young people to complete a course over 18 months as opposed to the standard 12 months.

Speaking at the event, Julian said “Rural businesses are the lifeblood of our countryside communities and they make a vital contribution to the national economy. It is essential that we champion the cause of our countryside which all too often has been overlooked by successive governments.

Many rural business across Yorkshire still don’t have access to the mobile phone and internet reception they need to compete. We have to hold the Government to account over its welcome commitment to a Universal Service Obligation of a least 10 megabits per second by 2020. We also need to make sure we have sensible planning policies in place that allow redundant farm buildings to be converted whilst at the same time protecting our countryside for the benefit of future generations.

“Finally, Yorkshire’s ongoing devolution negotiations must include not just our large cities but also the surrounding countryside as well. The Yorkshire brand is recognised across the world and only by working together can we compete against cities like London and Manchester.”