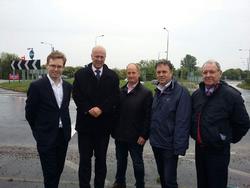 Since 2010, Julian has made the case for substantial upgrades to the A1237 and further dualling to the A64. During a debate in Parliament in September, Julian described the northern ring road as “acting as a noose on the city by choking growth and disincentivising inward investment.”

Transport infrastructure is featuring heavily in Julian’s campaign but his attention goes beyond improving York’s road network. Investment in the East Coast Main Line is essential to meet future passenger growth and Trans-Pennine electrification opens opportunities to improve services between York, Leeds and Manchester. Furthermore, an operation railway station in Haxby will ease congestion pressures on the city centre.

Following Mr Grayling’s announcement in October, Julian was quick to push the Transport Secretary on making a commitment to ensuring that extra capacity would be allocated to domestic flights, specifically those from Leeds-Bradford airport. Julian has been a long supporter of constructing a rail-link at Leeds-Bradford airport serviced by trains from York and believes this is essential to attracting greater investment into the city.

Speaking after the visit, Julian said: “It was fantastic to see the Minister here in York and I appreciated him taking the time to listen to my points regarding road, rail and air. Residents in York want a range of good transport options available to them; but we must also remember the many people who want to visit our city, whether this be for business or leisure.

I also believe that it is essential that we secure a devolutionary deal that gives greater power to local stakeholders over strategic transport policy. The ability to wield greater powers and take positive steps to attract businesses and jobs are clear examples of what the Northern Powerhouse needs to deliver.”