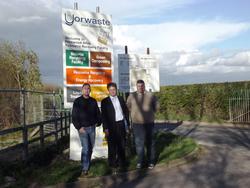 The Local Government Secretary Eric Pickles has today announced that a public inquiry will take place into plans to extend the recycling site at Harewood Whin, near Rufforth, on the outskirts of York.

Yorwaste Ltd had applied for planning permission to extend their facility to construct a material recovery facility and waste transfer station on greenbelt land. The City of York Council Planning Committee had recommended to approve the application but the planning process has now been suspended whilst the Secretary of State looks into the controversial plans.

The news comes after Julian appealed to the Secretary of State to call-in the application following concerns about unnecessary development on York’s surrounding greenbelt, which he argues should be protected from harm. Local villagers staged a protest at the site arguing that their small rural community would suffer from a large increase in the number of Heavy Goods Vehicles passing through the village.

Up to fifty HGVs already pass through Rufforth every single day, and over sixty households have objected to the proposals, with many arguing that it is simply not acceptable for the quiet village to face any further disruption. A fire also recently broke out at the facility in January, affecting around 300 tonnes of composting material. The blaze lasted for a number of weeks and caused a range of health difficulties and breathing problems for some nearby residents.

Commenting on today’s announcement, Julian said “As only a very small number of applications are called in each year, I am delighted that the Secretary of State has decided to intervene following overwhelming opposition to the plans from the local community. The proposals completely undermine the purpose of York’s greenbelt, which is to preserve the rural character of the city’s surrounding communities for the benefit of future generations.

“Furthermore, in light of the recent fire, serious questions have to be answered about the Council’s ability to operate a much larger facility at acceptable safety standards. Public safety and acting in the best interests of local communities must always be our top priorities and I look forward to representing the views of my constituents at the public inquiry. “