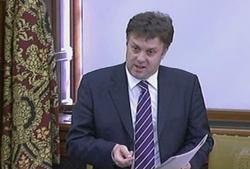 The Planning Minister, Nick Boles MP, hit out yesterday at local authorities, like the City of York Council, who are unnecessarily setting aside greenbelt land for future long term development.

Mr Boles’ comments came in response to a parliamentary debate hosted by Julian on ‘Land Safeguarded for Development in Local Plans’. Paragraph 85 of the National Planning Policy Framework gives local authorities the option to ‘safeguard’ portions of  greenbelt land for future long term development beyond the 15 year life the Council’s local development plan. In York, under the Council’s current draft of the Local Plan, over 1000 acres of land looks set to be removed from the ‘greenbelt’ and allocated as ‘safeguarded’ land.

Along with several other backbench MPs, Julian has raised concerns over the impact that the policy of ‘safeguarding’ land is having on the permanence of the greenbelt. He has called for a more pragmatic approach from local authorities, like York, who he said should continue to assess housing needs and provide for them as and when required.

During his debate, Julian said: “Once land has been removed from the green belt it is effectively lost, gone forever, as development is practically guaranteed to occur on that site at some point in the future… While local authorities are encouraged to make clear that safeguarded land is not available at the present time, I fear that some weak-willed local authorities sadly may sacrifice the long term interests of local residents for short term gain and permit development ahead of schedule.”

The Minister reiterated comments he had made previously, stating that: “safeguarding is not a requirement for every local authority with greenbelt land. It is something that it can choose to do, but only if necessary.”

In a statement thought to be aimed at the City of York Council, whom Julian has persistently attacked for being overambitious and recklessly ‘overinflating’ city’s actual housing needs, the Planning Minister went on to say that: “a vaulting ambition is not a sufficient justification for threatening protected land. Ambition and the desire to grow faster than one’s neighbours or perhaps to build a small empire is not a sufficient justification for putting protections at risk.”

Reflecting on the debate, Julian said: “I welcome the Minister’s very helpful comments and I hope that the City of York Council will give serious consideration to removing the allocations of ‘safeguarded’ land from their draft Local Plan, in light of the fact that there is absolutely no need for them. I’m also pleased that the Minister has agreed to review the terminology the Government uses for ‘safeguarded’ land, which frustratingly leaves many of my constituents under the false impression that the land is protected from development rather than allocated for it.”