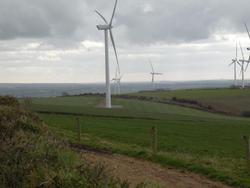 Julian addressed a packed out public meeting in Kexby last night to discuss the latest developments surrounding the controversial application for a giant wind turbine near the village.

The application for the 78 metre structure, which would dwarf even tallest part of the Minster, was submitted last year. Planning officers have since advised that the development should be refused planning permission because it amounts to inappropriate development on York’s greenbelt land.

Discussing the issue with local residents, Julian said “The strength of feeling on this issue is clear and the wishes of the local residents should be respected. At least eighty objections have been made to the Council, which is astonishing given the relatively small size of Kexby and the surrounding community”.

“Having been a farmer all my life I know how important it is that we generate more renewable energy. However, this should not be at the expense of our countryside. I will continue to do everything I can to make sure the Council does not go against both the recommendation of their own planning advisors and the wishes of local residents in and around Kexby”.

Julian is due speak at the Council’s Planning Committee hearing tomorrow where local councillors will decide whether or not to grant planning permission for the wind turbine.