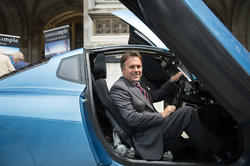 Julian, a member of the Energy and Climate Change Select Committee, has received a response to his parliamentary questions to the Secretary of State for Transport on extending hydrogen vehicle infrastructure nationwide, and the merits of hydrogen vehicles in relation to electric ones. He first raised the need for Britain to remain competitive in the development of this cutting-edge technology in a parliamentary debate in June.

Julian asked what plans the Department for Transport has “for facilitating the development of infrastructure for hydrogen vehicles in (a) York, (b) North Yorkshire and (c) the UK.”

Andrew Jones, Parliamentary Under Secretary at the Department of Transport, replied “ This Government is supporting the hydrogen for transport market in the UK by providing funding for an initial 12 hydrogen refuelling stations to be deployed by the end of this year.

These initial stations are primarily in the South East to support vehicle manufacturers’ geographically-focussed model launches. However, there are also stations in Sheffield, South Wales, Swindon and 2 mobile refuellers.

Further consideration how we can best support continued growth of hydrogen infrastructure will be made once the initial 12 stations have been delivered alongside assessing the development of the vehicle market.”

Julian believes that hydrogen powered vehicles have great potential as an alternative technology to electric cars as we move away from petrol and diesel power.