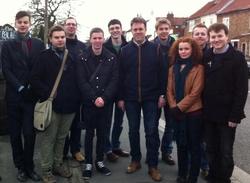 As part of the exchange, the York MP raised the student led initiative to the Minister’s attention as an example of local groups leading the way to clamp down on the problem. Mr Sturdy asked “Will the Minister join me in welcoming proposals from students at York University to establish a Street Angels-style initiative? The aim is to combat antisocial behaviour and to prevent alcohol and drug-related tragedies for those who find themselves in particularly vulnerable situations.”

The Home Office Minister, Norman Baker, made it clear that he was very much in favour of the plans. He responded by saying “I very much welcome that sort of local initiative and I congratulate those involved in the York University activity. That is why we have done away with the old top-down approach and given the agencies the freedom and flexibility that they need to make a difference locally.”

After the debate, Mr Sturdy welcomed the Minister’s endorsement. He said “Whilst the plans are still in their early phase and it is largely up to the Students Union whether they progress any further, it is clear that our students feel a strong responsibility to the local community in York, which is to be commended.”

“The city still has some problems with anti-social behaviour, especially late at night on a weekend. However with more local groups pulling together, along with the support of North Yorkshire Police, I am sure we will make great strides in tackling this problem and ensuring our city enjoys a safe, welcoming, and family friendly environment at all times.”