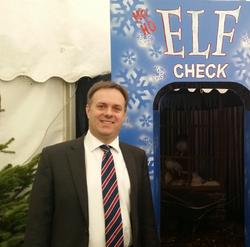 Driving around York at Christmas time, I am always heartened to see how festive everywhere looks. As the father of two young children, Christmas is about family in my household and I cannot help but spare a thought for those who are without their loved ones at this special time of year.

Personally, I have always found Christmas to be an important time to take stock of the year’s events in order to make the necessary resolutions for the New Year. As we enter the peak season for the dreaded flu, avoiding winter bugs is more important than ever. I recently visited a pharmacy in Haxby and saw first-hand the extra preparations being made for the winter period. Whilst I am pleased that these provisions are being made alongside the Government’s announcement that winter health funding has increased by 75% this year to over £700 million, York still receives a raw deal for overall health funding.

The current NHS funding formula skews much needed resources towards urban areas, resulting in Hull and Leeds receiving a disproportionately large amount of funding. In contrast, York and North Yorkshire, which has a far higher proportion of elderly residents living in more rural areas, does not receive as much funding as I believe it should. The strains on funding played an important role in the Vale of York CCG reversing its decision to refuse couples assistance with IVF treatment. Whilst this is to be welcomed, the current situation is simply not fair and along with the region’s other MPs I will continue to put pressure on the Government to deliver on its commitment to fairer health funding. I have also been raising awareness about concerns surrounding growing resistance to antibiotics in our hospitals. I have held a Parliamentary debate on this important issue and I will continue to do all I can to ensure that more is done to tackle what many health professionals consider to be the greatest threat facing modern medicine.

Whilst traffic congestion around York is still a major issue, many commuters will have felt that Christmas came early this year with the announcement that the A64 is to receive up to £250 million in Government funding. There are plans to construct a new flyover at the busy Hopgrove roundabout, with the A64 being dualled up to Whitwell-on-the-Hill. This investment is a huge step in the right direction, and hopefully brings the dualling of the York Outer Ring Road one step closer. As such, I recently raised the matter with the Prime Minister and have secured a follow-up meeting with the Secretary of State for Transport. A delegation of local business leaders will be joining me in Parliament in an effort to build on the Government’s investment and secure the necessary funding once and for all. I am also delighted that having raised the matter of the East Coast Mainline Headquarters in Parliament, it has now been confirmed that the HQ will remain in York, safeguarding the city’s world-class rail expertise for the future.

This Christmas will also be a nervous time for many households as they wait to see whether promises of radical changes to the Council’s controversial housing proposals will be honoured. The vast majority of the communities surrounding York have opposed the proposals which if implemented will change our great cathedral city beyond all recognition. I have hosted over a dozen packed-out public meetings this year on this very issue and given that the proposals remain very much in play, I will continue to campaign for a more sensible alternative that balances the need to house local families with our often overlooked responsibility to protect our greenbelt surroundings for the benefit of future generations.

As this is my last column of the year I would like to wish everyone a very Merry Christmas and a Happy New Year.