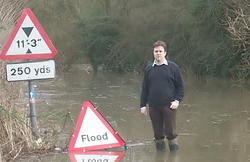 The recent television coverage of the flooding in the Somerset levels and in the South more generally has been harrowing. These past few weeks my thoughts have been with those families whose lives will have changed irrevocably, almost in the blink of an eye, as a result of the floods. The images serve to remind us that climate patterns are changing and our long term future lies in a fragile balance unless we make changes to the way we live and the impact we have on our environment.

The coverage has also included some largely unhelpful finger-pointing from Ministers, Shadow Ministers and Environment Agency officials attempting to apportion blame for what is happening. This disappointing practice only really serves to distract the public gaze away from the experiences of the victims of these awful floods and the help they require in, what will be for many, their greatest time of need. I was therefore glad that the Prime Minister called for greater focus on the task at hand. There will, as he said, be time for discussions later.

As we all know, York and its surrounding communities are certainly not immune to floods of this magnitude and with the ominous reports of more bad weather to come, I’m sure we will all be paying very close attention to events in our area and the Environment Agency warnings.

Clearly lessons must be learnt from the recent flooding. The waterlogged homes on the Somerset levels should serve as a reminder that we must be extremely cautious about developing on known flood plains. With the City of York Council proposing several large housing developments in areas prone to flooding in their draft Local Plan, I fear this short-sighted policy can only result in misery in years to come. I have expressed my concerns to both the Council and the Government over the degree to which housing developments are impacting on local flooding and I will continue to lobby for tougher rules within our planning system to ensure that we do not persist in making these same mistakes.

While the nation’s attention has been gripped by the extreme weather conditions we’ve experienced and the traumatic implications, important parliamentary work has continued as normal and a wide variety of issues have been debated in recent weeks. I was pleased to have taken part in one such debate on Gypsy and Traveller Policy earlier this month.

My opposition to the Council’s Gypsy and Traveller policies within their draft Local Plan has been well documented and I spoke in the debate to highlight my concerns over the locations of the sites the Council have put forward. As the Plan currently stands, pitches for 41 Gypsy and Traveller families have been proposed in what I would class as inappropriate countryside locations in small rural communities in my constituency.

Since all of these pitches have been allocated on York’s established greenbelt, I was pleased to hear the Local Government Minister, Brandon Lewis make clear that “Traveller sites are inappropriate for greenbelt development and that local authorities should strictly limit the development of new Traveller sites in the open countryside”.

Readers may also be aware of my fears that the Council has grossly exaggerated the accommodation requirements of Gypsies and Travellers in our area, by including families living in bricks and mortar housing in their needs assessments. As such, I welcomed the Minister’s determination to ensure fairness in the system, stating that “if someone has ceased to travel, it is right to ask whether they should be treated as a Traveller for planning purposes”.

Following the debate and the Minister’s comments, I have written to the Council’s planning chiefs to call on them again to withdraw all of the proposed Traveller sites within the Plan, on the grounds of their greenbelt locations and to reassess the pitch requirements of the Travelling community.

Needless to say, with the next stage of the Local Plan process due to commence shortly, the future shape of our great city and its surrounding communities remains as uncertain as ever.