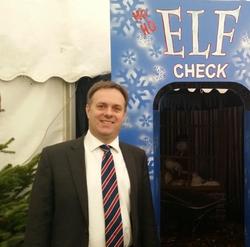 As 2017 draws to a close I wanted to take this opportunity to wish all constituents a very Merry Christmas and Happy New Year.

Had somebody told me this time last year that I would be fighting a General Election campaign in just under four months I would have been very, very sceptical. However, I was extremely grateful to be re-elected with an increased share of the vote back in June and I promise to continue banging the drum for our areas in Westminster.

As expected, our exit from the EU has remained the major topic of political debate throughout this year. The government has recently agreed a major breakthrough in the talks, which will allow the negotiations to move on from discussions around separation to consideration of trade arrangements, and other elements of our future relationship with Europe. I think this agreement is a vital step in implementing the referendum decision of June 2016.

I have been extremely busy in Westminster this year. Brexit has loomed large in the work of the Environment, Food and Rural Affairs Select Committee, to which I was honoured to be elected by my parliamentary colleagues in September. The environment and agriculture are some of the areas most affected by withdrawal from the EU, and are of particular importance to our area. The Committee’s remit also includes other significant issues for local residents, like flood defence, air quality, and animal welfare, so I am glad to have been able to contribute to scrutiny in this area.

Locally, York’s Local Plan for housing is progressing with final submission scheduled for next year. It has been a long road to this point and there remains points of contention in the document, but we have undoubtedly moved forward towards a more reasonable overall settlement. I have held public meetings towards the back end of the year in Elvington and Strensall, and I was able to make my own submission to City of York Council.

I remain frustrated that we seem no further along the line in terms of devolution. This is concerning because it impacts on Yorkshire’s prosperity, and areas around us are forging ahead with mayors and new funding. However, I am encouraged that City of York Council has secured £300,000 to conduct a development study for the full dualling of the A1237.

Finally, I would like to pay tribute to those who, with characteristic diligence, will be keeping all of us safe over the festive period. I anticipate many men and women will be forgoing certain Christmas celebrations in the line of duty and I would ask you to join me in sharing a thought for them all.

As ever, please do get in touch at julian.sturdy.mp@parliament.uk if you have any concerns or I can be of assistance. Once again, I wish you and your loved ones a Merry Christmas and a Happy New Year.