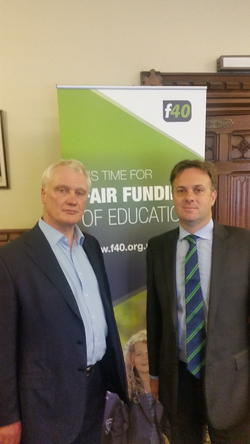 Watching David Cameron leave Downing Street with his young family shows just how swiftly things can change in British politics. David is man of the highest moral integrity and he can be proud that after his six years in office, Britain is a better place thanks to his leadership.

Prior to the EU Referendum I spoke with a number of people who were convinced that there would be a serious fracture in the Conservative Party whichever way the result went. I was not convinced by this assertion, and believe the party has shown its unparalleled ability to unite to concentrate on serving the best interests of our country. I am impressed with the strong support Mrs May is receiving from the parliamentary-party as she embarks on the difficult task ahead.

Our new Prime Minister has been clear that she does not want her administration to be defined simply by ‘Brexit’ and I am encouraged by her commitment to increasing social mobility and protecting the ‘precious bond’ between England, Scotland, Wales and Northern Ireland.

However, good government requires a strong opposition. This is severely lacking during such an important time as we construct the fundamental direction for the future of Britain. I am seriously concerned that the recent shadow cabinet exodus undermines effective scrutiny and the turnover of shadow ministers during question sessions in the House of Commons is verging upon farcical.

It is all change at the top, and all four of the great offices of state have new occupants. I am looking forward to working with old and new Ministers as I represent my constituents in York Outer. There has been much interest in the press about relaxation to the restrictions on opening new grammar schools, but the delay to introducing a fairer funding formula for schools has been less well publicised.

The new Secretary of State for Education, Justine Greening, delivered a written statement announcing that the implementation of a new funding formula will be delayed until the 2018-19 academic year. I am disappointed that this was released on the last day of the Parliamentary session before the summer recess. Per pupil funding in York has been historically low and I am frustrated that this unfairness will persist for a further year. Although Ms Greening has reaffirmed the Government’s commitment to introducing a fairer funding formula I shall be watching closely to ensure that this pause is not used to water down a key manifesto commitment.

Fairer funding arrangements were scheduled to come into effect for the 2017-18 year but York students will now receive the third lowest per pupil funding rate in England. To put things into perspective, a child in York will receive £4,163 from the Schools Block whereas at the top end of the scale a child in the London Borough of Tower Hamlets will be receiving £6,965. This amounts to £2,802 more per pupil than York students receive.

Education funding reform not only concerns school-aged children, but also Early Years funding for children in nurseries and with childminders. The government’s 30 hours free childcare pilot will be launching in York this September, but providers remain in the dark about the funding they will receive when this scheme is rolled out across the country in 2017. Initially, this roll-out coincided with the Government’s target to delivering fairer funding arrangements for the 2017-18 academic year but as a result of the delay there is now a considerable degree of uncertainty amongst nurseries and childminders.

It is widely anticipated that these changes will benefit rural areas such as York, North Yorkshire and Lincolnshire, whilst slightly reducing the funding available to most London boroughs. I accept that introducing fairer arrangements will result in some schools having to re-adjust their budgets but it is important that students are able to access properly-funded high quality education regardless of where they live.