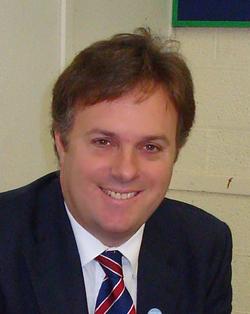 August is always an unusual month in life of an MP. With Parliament in recess, the summer period is widely regarded as a quieter time for politicians. This contrasts sharply with my experience as a farmer, when the busy harvest and cultivation seasons dominated much of my time in previous August and September periods.

In reality, however, August remains a busy time for anyone who works in Politics. I always treat the summer months as an opportunity to catch up on pressing constituency casework, reflect on recent political developments and think ahead about the local and national issues which are likely to be high on the agenda in the near future.

However, by spending the summer period back in the constituency, I’m also always really grateful for the opportunity to spend more time with my family and catch up with old friends. After all, it’s not just the weather that makes the British summer so pleasant, it’s also the opportunities it provides for us to come together and enjoy one another’s company.

Readers will have been hard pushed to miss the great news that Britain’s Royal Family have welcomed their newest member. It’s been really moving to see how the Nation has celebrated the news of the birth of our future King. I’d like to take this opportunity to congratulate the Duke and Duchess of Cambridge and wish them all the best in their first few weeks and months as parents. (I was also very humbled to hear that they have chosen to name Prince George after my own son!)

The Royal news has dominated the global media over the past few weeks, but it’s also been a great time for British sports fans (and particularly those born in God’s own County). Not only did the British and Irish Lions thrash the Aussies to seal the series win, but more recently England have retained the Ashes. Us Yorkshire folk should be immensely proud that three of our own sons were in the winning team, including Johnny Bairstow, who was schooled in York.

The first of the month (Yorkshire Day) saw Yorkshire County Cricket Club on top of the Championship and this was followed closely by York City winning their first league game of the season. As a Leeds fan, I can’t fail to mention United’s great victory over Brighton, which I had the pleasure of watching with my two children.

The feel good factor this summer has also been strengthened by the news that last quarter’s economic growth was much higher than had, at first, been predicted, which marks a clear sign in many peoples’ minds, that the economy is now firmly back on the road to recovery. I think this is a strong vindication that, despite criticism from the Left and a number of tough decisions having to be made, this government is doing what it set out to do in 2010: cutting the deficit and growing our economy.

We must be careful not to get too carried away and the government have been clear that there is still much work to be done. However, the economic growth revisions are not the only indicators that things are picking up. Unemployment is falling and recent stats have revealed improvements in manufacturing output, car sales, service sector expansion and retail sales, which have enjoyed their fastest July growth in seven years.

The UK recovery has been backed up by the Governor of the Bank of England, Mark Carney’s recent decision to hold interest rates until unemployment falls below 7% and his comments that “a renewed recovery is now underway in the United Kingdom and it appears to be broadening”.

As our economic future looks increasingly promising, it’s really important to me that the importance of family, as the bedrock of our society, is recognised within our tax system. Since being elected to serve the people of York Outer in 2010, I’ve been pushing for the introduction of transferable tax allowances, which could see marriage rewarded with tax breaks.

I was therefore really pleased to hear that the government are due to publish their plans to introduce these much needed changes shortly. I look forward to returning to Parliament in September and being able to champion, with renewed vigour, what I feel is a really important issue.