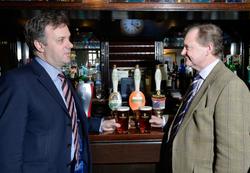 This week, Julian has written to the Chancellor asking him to include measures to support the British pub industry in his upcoming budget on 6th November.

In a letter to constituents who have written to him about the issue Julian said:

‘In my letter, I highlighted the crisis that the British pub industry has faced in recent years, with a quarter of pubs closing their doors since 2001. Whilst there are many reasons for this decline, it has not been helped by a taxation policy that means that 1 in every 3 pounds spent in pubs goes straight to the taxman.

Two of the worst drains on the sector are beer duty and business rates. Beer duty is currently three times the EU average and 11 times the level paid by pubs in Germany and Spain. Whist the Government chose to freeze this in the last budget, what we really need is a cut and in the long-term a substantial reform of how it applies to small local pubs and breweries.

I have also asked the Chancellor to finally commit to delivering long-overdue reforms to business rates. Two years of partial relief was announced last year, and this is already benefiting most independent pubs and shops in York. However, I have urged the Chancellor to find a longer-term solution and update the whole system to better reflect modern consumer habits. The Treasury needs to recognise that this tax on high-street property is putting our small shops and pubs at an unnecessary disadvantage as they try and survive in challenging market conditions.

I hope that my letter conveys to the Chancellor the value that many people in York place on their local pub as an important community centre and the widespread feeling that serious action is needed to help pubs survive and thrive in the future.’