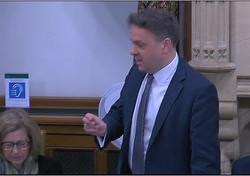 Julian has appealed to Highways England to revisit its business case for a proposed dual carriageway between Hopgrove and Barton Hill and recommend that it is included in the next road investment period from 2020 to 2025.

In the letter, signed by Robert Goodwill, MP Scarborough & Whitby, Kevin Hollinrake, MP Thirsk and Malton, Nigel Adams, MP Selby & Ainsty and Sir Greg Knight MP East Yorkshire, Julian said: “It makes no logical sense that your initial business case concluded that further improvements to the Hopgrove roundabout resulted in better value for money than the dualling of the A64 carriageway between Hopgrove and Barton Hill.”

Despite welcoming the £135 million Hopgrove Roundabout flyover improvements, which were originally proposed by Highways England, Julian is clear that this alone will not solve the long tailbacks.

“Instead the delays that are observed on the approaches to the junction can be attributed to the blocking back from the merge from dual to single carriageway on the A64 approximately 500m north east of the Hopgrove junction.”

Julian also pointed out that these traffic problems which are already causing huge delays for local residents, businesses and hundreds of thousands of tourists are set to get worse.

The A64 Hopgrove Feasibility Study estimates that traffic will grow by up to 28% by 2035 and he argues that “it is unthinkable that this situation would gradually worsen over a period of 11 years until we saw any improvement.”

The dual carriageway (£120-£250m) which has the support of North Yorkshire County Council and local businesses will significantly reduce traffic issues and journey times and make a huge difference to the regional economy.