Julian welcomes transport investment for York and the Northern Powerhouse 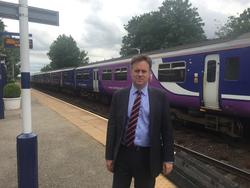 A blueprint for how £13 billion of government investment in road and rail improvements will help create the Northern Powerhouse has been unveiled by ministers this week.

The plans demonstrate how transport links across the North are being transformed by Government investment. By strengthening road and rail connections between York, Leeds, Manchester, and Liverpool, businesses will find it easier to access new markets and skills from across the region.

The Government will invest in over forty major projects across Yorkshire and the North of England over the next five years. The plans are worth £4.8 billion and are expected to create over 2,000 jobs, transforming city to city connectivity and reducing travel times across Yorkshire.

Welcoming the investment Julian said “It is fantastic news that the Government remains committed to investing in the North, which is essential if we are to create a more balanced economy. Local businesses need the right infrastructure into order to have the confidence to invest and create new jobs and improving transport links between York and the northern cities of Leeds, Manchester, and Liverpool will create yet more opportunities for businesses and local communities.

“However, more still needs to be done and I am working hard to ensure that we get the funding we need for further improvements to our congested northern ring road, improved connections to Leeds Bradford Airport, and potentially a new railway station at Haxby. Such schemes would have a transformative impact on York’s local economy and I will do everything I can to ensure that they become a reality.”

Transport Secretary Patrick McLoughlin, who has agreed to meet Mr Sturdy to discuss the future of York’s northern ring road, unveiled the transport blueprint this week. He said “This One Nation Government is determined to close the economic gap between North and South. Investing in transport, something that successive governments have failed to do sufficiently, is vital to making that happen.

“We had a choice, building the infrastructure our country needs, or letting our transport system become a brake on growth and opportunity. We have chosen to invest for the future. Across the north, that investment is already having a huge impact, with programmes underway to upgrade our railways and our roads. We are determined to keep the momentum going.”

Breakdown of investment for York

York is set to benefit from up to £250 million of government funding to upgrade the Hopgrove roundabout, which will consist of grade separation of the junction and dualling as far Whitwell on the Hill.

The northern ring road has also been earmarked almost £40 million to upgrade roundabouts on the busiest north-west section.

Furthermore, the A19 from York to Newcastle will be upgraded to expressway standard

Improvements are planned for the North TransPennine line, which will deliver 6 fast trains per hour alongside shorter journey times on the Manchester-Leeds-York corridor.

To the east of Leeds, signalling and track works will enable more trains to operate between Leeds and York in order to accommodate the projected growth in rail services and improve journey times.

York is also set to benefit from the Intercity Express Programme on the East Coast Mainline, which is a £5.7 billion renewal of the UK’s high speed train fleet.

This will deliver more seats, more trains, enhanced reliability and faster journey times from York to Edinburgh and London from 2018. The nine-car trains have 18% more seats than the Intercity 225 trains that they are replacing.