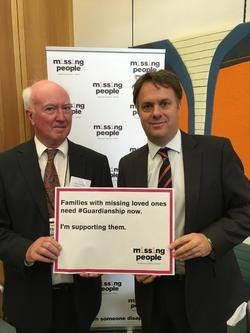 Julian has today welcomed the introduction of the Guardianship (Missing Persons) Act 2017 after a long-fought campaign. Known as Claudia’s Law, after Claudia Lawrence who went missing in York back in March 2009, the Act will allow families to manage the financial and property affairs of a person that goes missing.

This campaign has been led by York resident Peter Lawrence, Claudia’s father, and the charity Missing People. Julian has supported the Lawrence family and other campaigners together with other MPs on this issue over several years, and has been very active in making the case for this reform at Westminster.

Responding to the law coming into force, Julian said:

“I am glad that after two years of pressing the Ministry of Justice to bring forward the implementation of Claudia’s Law, families will finally be able to exercise the guardianship powers afforded to them by the Act.

I thank the Lawrence family for their tireless campaigning on this issue and I will continue to press the Government to ensure that the law operates to support families who are going through this unimaginably traumatic experience.”