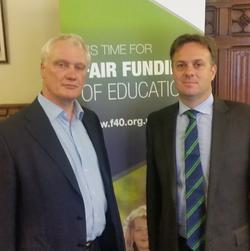 The Secretary of State for Education made a statement to Parliament announcing the second consultation on the Government’s implementation of a national funding formula for schools in England that will come into effect from September 2018.

In her speech, Ms Justine Greening described the current school funding system as “unfair, opaque and outdated”, before asserting that “similar schools with similar students receive levels of funding so different that they put some young people at an educational disadvantage”.

Per pupil funding in York is at the third lowest level in England and Julian has highlighted the historical unfairness of the city’s funding deal for a number of years. Julian was a supporter of the f40 campaign for fairer funding arrangements and has had many meetings with head teachers and City of York Council to discuss concerns with the current arrangements.

Initial figures from the Department for Education suggest that York will receive £5m more across the city, representing a 4.4 per cent increase. Furthermore, Yorkshire as a whole could receive an additional £96m each year based on the figures included in the consultation documents.

Following the announcement Julian managed to elicit a commitment from the Education Secretary in the question session that followed, saying:

“Schools in York have some of the lowest, if not the lowest, per pupil funding in the country, with some schools in London receiving more than £3,000 per pupil more, leaving schools in York on the brink of making some very difficult decisions, despite delivering excellent education. What message can the Secretary of State send to schools in York that have been waiting for this announcement for far too long and want to see it implemented as soon as possible?

The Secretary of State then delivered an encouraging reply:

“I think this will be a much fairer approach for all schools, including those in York, and we are taking steps to introduce it rapidly over the remainder of this Parliament.”

Speaking afterwards, Julian welcomed the Secretary of State’s announcement but is carefully analysing the details of the proposed funding arrangements and seeking feedback from local schools.

Julian went on to say: “For far too long students in York have received an unfair level of funding in comparison to their peers in similar areas and the Government must be congratulated for having the courage to push ahead with reform following successive hesitancy from previous administrations.”

“Documents released yesterday show the difference each school will be receiving from September 2018, the National Funding Formula begins, however these figures are currently indicative and will not be confirmed until the summer. We are almost there, but it is imperative we keep working to ensure York gets the best possible deal”

The next stage of the consultation will run for 14 weeks until 22 March, with final decisions to be made in summer next year. Julian is encouraging all local schools to engage with the consultation during this time, and this can be done by visiting: https://consult.education.gov.uk/funding-policy-unit/schools-national-funding-formula2/