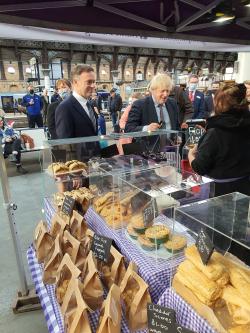 Yesterday, Julian welcomed the Prime Minister to York railway station as he embarked on a tour of northern constituencies to coincide with the Government announcement of their Integrated Rail Plan.

Describing the plan as a ‘mixed bag’, Julian said he shared the disappointment of many that the Government were rowing back on commitments to build the eastern leg of HS2 and a new high-speed line between Manchester and Leeds. Nevertheless, he urged people to look beyond the headlines and focus on the tangible benefits that the plan promises to bring.

Included in the plans yesterday was £96 billion of investment in a range schemes across the North and the Midlands. This includes new high-speed lines between Warrington and Marsden on the Yorkshire border and between Birmingham and the East Midlands. The existing Transpennine route is to be fully electrified between Manchester and York and there will be a new package of upgrades to the East Coast Mainline to reduce travel times. Taken together, those travelling from York will see journey times cut by 14 minutes to London and 20 minutes to both Manchester and Birmingham. Service capacity on the Transpennine route will be more than doubled.

Also announced was £200 million to plan and build a new tram network for West Yorkshire, with Leeds currently being the largest city in Western Europe without its own mass transit system. £100 million will also be invested in deciding how best to bring HS2 to Leeds, reaffirming this as a long-term Government commitment.

The Integrated Rail Plan announced yesterday can best be described as a mixed bag from York’s perspective. The headline, that Leeds (and by extension York) will no longer benefit from new high-speed lines to Birmingham and Manchester has understandably generated a lot of anger. Whilst I accept the Government’s position that there are improvements that can be made to existing lines which will have a more immediate benefit, it is imperative that connecting Leeds to the high-speed network is maintained as the long-term ambition if our region is to avoid losing out on investment to other areas of the country.

Despite this, I would encourage people to look beyond the headlines, to the tangible benefits that are now set to be delivered in the next 10-15 years rather than 20-30 years. The reduction in journey times between York and virtually every major English city remain impressive. There are newly announced upgrades to the ECML, directly benefiting York and a long overdue mass transit system for Leeds. There is also a clear plan to solve capacity issues and provide a greener, faster service across the Pennines. Crucially these goals are attainable in the short to medium term, integrating the flagship projects into the existing rail network and in doing so will provide benefits to a string of local towns and not just the major cities.

I can assure residents though that I will continue to lobby hard for investment in our region and will hold the Government to their promises to bring high-speed rail to Yorkshire. ”