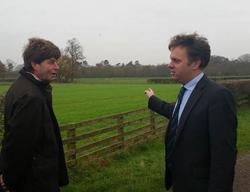 After calling for major reforms to the Government’s policy on Gypsy and Traveller sites, local MP Julian Sturdy has requested a debate on recently announced guidelines.

Speaking in Business of the House debate yesterday, Julian said “Many of my constituents will welcome the recent changes to the definition of “a Traveller” within the planning system, which will remove the requirements on local authorities to provide caravan pitches for those already settled in bricks and mortar housing. As such, may we have a debate on this new guidance, to reinforce the need for greater fairness in our planning system for both the settled and the Traveller communities?”

Welcoming Julian’s question, the Leader of the House, Chris Grayling, said “That is a really important point… I take a simple view on this. If a Traveller hopes to have beneficial arrangements in the planning laws but does not intend to travel, most people in this country would say that that is simply not right. We cannot have people who intend to live in a fixed abode having their own particular arrangements within our planning laws. Our laws should apply equally to every single person in this country regardless of how they live their lives. My view is straightforward. If a person is not travelling, they cannot claim to be a Traveller within our planning system and have special arrangements. I hope that this new Government policy will deal with this issue, which I know frustrates many constituents.”

Julian has been campaigning on this issue for a number of years, and has welcomed the change in policy, which will ensure that only those who lead a genuine travelling lifestyle will be treated as travellers for the purposes of planning policy. This will mean for the first time that any application for a caravan site by someone who does not travel permanently will be considered in the same way as an application from the settled population.

It had previously been decided by the former Labour Council that York should provide a further 66 traveller caravan pitches and a 8 more travelling showman wagon plots, which would have more than doubled the amount of traveller accommodation around the city. The Government has now decided the previous guidance on assessing traveller housing needs is inadequate and new guidance will be published and laid before Parliament. The new rules will also offer greater protection for York’s Green Belt and surrounding countryside from unauthorised development, such as those recently seen in Earswick and Woodthorpe, and travellers who have made intentional illegal encampments will now be treated less favourably than those who abide by the rules.

Welcoming the change in policy Julian said “I am delighted that the Government has listened to our campaign and acted quickly. I have long been concerned about the perceived unfairness of the planning system, and I am looking forward to the proposals being debated in Parliament. We need to make sure that planning authorities like York are in a strong position to adjust their future local plans to implement the changes”.

Pictured: Local farmer Roger Jewitt discussing a proposed traveller site at Naburn with Julian, which may no longer be required due to recent changes in planning guidance