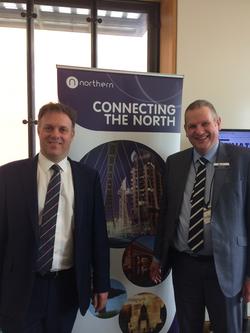 Once again, Julian hosted a Northern Rail event for Members of Parliament across the north to meet with directors and discuss upcoming developments on the rail network.

Following a successful event last October, MPs from across the region took the opportunity to drop-by and discuss progress on a number of projects aimed at modernising rail travel. The event was also a chance to raise specific concerns and queries raised by constituents.

Julian was encouraged to hear about progress on upgrading rolling-stock on the Harrogate line and found out more about the Northern Connect express services that will be introduced in stages up to December 2019.

Northern manage and operate Poppleton station, used by 60,000 passengers last year and currently the only railway station in York Outer.