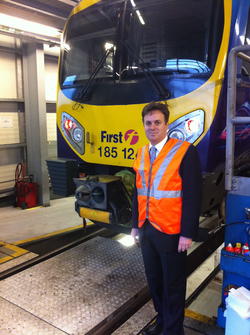 Julian has welcomed several of the announcements in the Chancellor’s Autumn Statement yesterday, saying they have “paved the way for a truly northern economic powerhouse.”

Reacting to the Chancellor’s pre-budget report on the British economy and his investment pledges, Julian said:

“The autumn statement has shown that the Government’s long term economic plan is paying dividends, not just in London and the South East but across the Yorkshire and the North too. The difficult decisions being taken by the Conservative-led Government over the past four and half years have enabled us to halve the budget deficit, despite slight increases in borrowing largely caused by our income tax cuts for hardworking families. Unemployment in my constituency has fallen by two thirds since 2010. Great Britain is paving the way to future prosperity, as the fastest growing economy in the G7 and with economic growth as high as 3%.  We must not be complacent and there is certainly a long way still to go, but it’s clear from today’s announcements that our long term economic plan is working up and down the country.

“But most importantly, the Chancellor has made clear that this is to be a northern-led recovery, by announcing substantial investment in our region’s infrastructure. No sooner had the Government approved plans for HS2 than they began discussions on HS3, which will improve connectivity across our northern cities and enable our region to reap maximum advantage of the benefits HS2 will undoubtedly bring. I was also delighted to hear the Chancellor announce new franchises for the Transpennine Express and Northern Rail routes, which, with the new rolling stock, will bring the latter firmly into the 21st Century and is likely to bring about very real benefits for many of my constituents who commute to work.

“The investment in rail has been matched by the biggest roads programme in a generation, with the Hopgrove roundabout set to be a major beneficiary. I am pleased that this important junction linking the A64 to the northern ring road will now finally be grade separated. Flood defences in York are also in line to profit from the substantial Government investment of £2.3billion to protect over 300,000 homes across the country.

“Of all the announcements today, I was perhaps most pleased to hear the Chancellor talk of further devolution as a means of creating a truly northern economic powerhouse and tackling the north-south divide once and for all. I was particularly delighted to hear him say that his door is always open for further decentralisation of power to other northern cities following the Manchester model. However, for me it is absolutely essential that we do not leave our rural hinterlands like York and North Yorkshire behind. I want to see our great city playing a leading role in our beautiful county, with real power over how our rural infrastructure should develop and without having to beg for the crumbs from Leeds’ table. This is my vision of a devolution that works for all and I’ll continue to lobby the Chancellor to ensure it becomes a reality.”