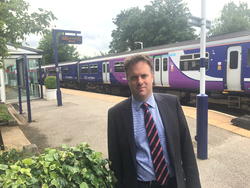 Julian has welcomed the Chancellor’s announcement of extra funding to improve regional rail and road links, which could provide significant benefits for York and North Yorkshire.

Speaking yesterday at the Conservative Party Conference in Manchester, Philip Hammond announced that the government will allocate £300 million to adapt infrastructure on the new HS2 line so it can be linked with future Northern Powerhouse Rail services. This would be designed to ensure faster train services between York and the other great Northern cities of Leeds, Sheffield, Manchester and Liverpool, as well as better connections south to the Midlands and London.

The Chancellor also earmarked £100 million for 33 schemes to improve local roads by reducing congestion and increasing access to workplaces and new housing, 10 of which will be in the Yorkshire and Humber region.

Commenting after the announcement, Julian said: “I am glad to see the Chancellor commit £300 million to help connect York and other Northern cities to HS2, delivering on the Conservative election commitment to invest in our region’s railways. This can help our city share in the benefits of HS2, both in terms of economic opportunities, and better transport connections for local residents.

Having long campaigned for improvements to York’s roads, I am also pleased to see new money announced to fund local road projects in Yorkshire and Humber. I will be looking closely at the details of these funding announcements, and pressing the Chancellor to make sure our city’s transport infrastructure gets the new investment it needs.”