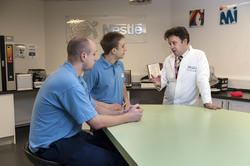 Julian has welcomed the latest employment statistics today, which show York Outer to be among the lowest constituencies in the country for people claiming out of work benefits, such as Jobseekers Allowance and Employment & Support Allowance.

Figures from the House of Commons Library reveal that the number of people claiming in the patch fell by 58 over the past year to just 254. This represents a rate of 0.6% of the economically active population aged 16 to 64, the 9th lowest claimant count out of the 650 UK constituencies. This is sharply below the equivalent rate for the UK as a whole, which is 2.4%. Youth unemployment for 18-24 year olds also fell significantly in York Outer.

Nationally too the picture is looking extremely positive, with employment reaching a new record high of 74% and a record 31.4 million people in work, up 1.1% or 588,000 people in the past year. In addition, wages have been rising with total pay up 2% over the past year.

“I am delighted with today’s announcements which show that unemployment is continuing to fall in York Outer. It has fallen by 71% since December 2010 and by 18% since December 2014, putting it among the lowest constituencies in the country in terms of out of work benefit claims. This means the security of a pay packet for more families the in constituency I am so proud to represent and it is testament to the strong economic management of the Conservative Government.

“It is also of great credit to the local economy and the businesses who are investing in our area and taking more people on. After a difficult Christmas period, York is fighting back. However it is important that we continue to get the skills we need to maintain this positive trend and while more employment is always to be welcomed, we have to make sure we are getting the right type of jobs in our area. We have come on leaps and bounds in recent years, but there is still much work to be done both locally and nationally.”