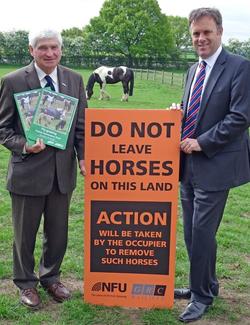 Legislation introduced by Julian before the General Election to protect horses from neglect is due to come into force today.

The Control of Horses Act 2015 will dramatically shorten the time it takes to rescue abandoned horses from over two weeks to just four days. The Act will also extend the protection of the law to horses on both public and private land, and will allow rescued horses to be gifted to animal welfare sanctuaries for the first time.

Visiting the Equestrian Centre at Askham Bryan College, Julian said “It is fantastic news that farmers and local councils will now have the tools they need to rescue horses that are being illegally fly-grazed. I was fortunate enough to have received the full support of a wide range of animal welfare and countryside organisations, who were united in their goal to see these changes brought into force.

“There is now no excuse for allowing horses and ponies to be abandoned to a lifetime of neglect and I hope to see many more animals rehomed in the near future.”

If you have seen any horses that may be being neglected, please do get in touch and Julian will do everything he can to make sure that the animal’s best interests are being looked after as a priority.

Watch Julian’s video with the NFU below: