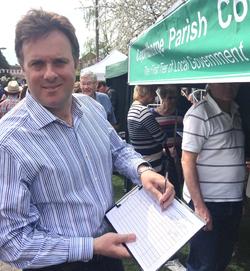 Julian has today welcomed the announcement by the government that the existing planning framework is to be strengthened to give local communities greater powers to oppose unwanted onshore wind farms. The announcement comes just a few weeks after Julian wrote to Eric Pickles MP, the Secretary of State for Communities and Local Government, to press on him the need to give local communities greater say in deciding where wind turbines should be located.

Recently, Julian has hit out at the City of York Council for proposing over 40 potential wind farm sites on the greenbelt, within their draft Local Plan. As part of his campaign to protect York’s greenbelt, Julian wrote to the Secretary of State that he and many of his constituents had ‘grave concerns’ over the scale and quantity of the proposed sites within the Plan. In his response, Mr Pickles said that the existing planning framework ‘states that great weight should be given to conserving landscape and scenic beauty and also sets out rigorous protection for the greenbelt.’

However, today the government have announced series of planning reforms to ensure that local communities have earlier and better involvement in deciding where proposed wind farms are to be situated. They have made it clear that the need for renewable energy should not automatically override environmental protections and planning concerns of local communities.

In response to the announcements, Julian said in the Commons:

“I welcome my hon. Friend’s statement. In my constituency, the Council’s draft Local Plan proposes the development of 40 new wind farm sites on greenbelt land. What message would my hon. Friend send to a council which is intending to impose those sites, in environmentally sensitive areas, on local communities that are deeply opposed to them?”

“I think the message would be that the Government have listened carefully to what local people say about the way in which planning has been applied and why they are concerned about it. We want to ensure that their voice is clear and loud and listened to.”

“As someone who is widely known to be sceptical of onshore wind power and its questionable benefits, I believe today’s announcements are a massive step in the right direction. Without a doubt, these planning reforms will be hugely important in the campaign to protect York’s greenbelt from the incredibly concerning proposals for 40 new wind farms, within the Council’s draft Local Plan. Over the coming weeks, I will be doing all I can to ensure the Council heed this clear message from the government and act upon the views of the local communities around York who have been steadfast in their opposition to much of the draft Local Plan.”

Pictured: Mr Sturdy signing a petition to protect York’s greenbelt in Copmanthorpe, which has been threatened by wind farms in the past and is yet again by the Council’s draft Local Plan.