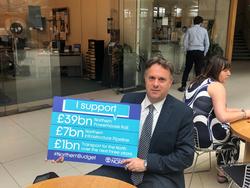 Julian has today welcomed the announcement that the Northern franchise is to be taken over by the public operator.

It is hoped that the move will allow for a better service for customers and much needed investment in stations and rolling stock. Plans announced by the Secretary of State today will see an expanded Sunday service and all trains undergo a deep clean. Longer-term the Government plans to invest in more trains and the lengthening of 30 platforms to increase capacity.

The Government has provided assurances to Julian that Northern’s base in York will be retained under the public operator and that there will be no impact on services or staff.

Commenting on the move, Julian said:

“I welcome the Secretary of State’s announcement today and hope that this marks the beginning of the end of the North lagging behind other parts of the country in the quality of our commuter rail services.

In the coming months I will be working hard to keep the Government to their promises on improving quality and reliability. In the long-term however any changes to the franchise must not come at the expense of jobs in York. I will continue to argue that as a centre for the UK rail industry, the replacement operator serving Yorkshire and the North East should be based here”.