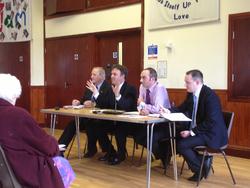 After a long campaign to improve bus services in York Outer, Julian is delighted to hear that First will be introducing a series of changes to their network on 29th September.

The announcement from First follows a public consultation process they hosted earlier this summer, which was in response to a number of meetings Julian held with senior representatives from the bus company over the past year to discuss the frequency and reliability problems experienced on a number of their services.

Further information and a full list of the incoming changes to First’s services can be found on their website, by clicking here. The key changes for York Outer residents are:

Earlier journeys on the No.10 and 10A between Stamford Bridge and Poppleton, via the City Centre, and a thoroughly revised Sunday service to improve reliability.

On the changes, Julian said:

“I welcome the announcements from First that they intend to make changes to a number of their services and I commend them for listening to local residents when deciding how to make improvements. I’m particularly pleased with their decision to return the half hourly frequency to the No.13, by adding the No.13A and I’m sure Haxby and Wigginton  residents will join me in praising this decision. The initial reduction in frequency introduced last September was met with considerable opposition from local residents and it caused inconvenience to much of the working population in these communities. After making numerous representations, I’m really glad that First have rectified these problems and gone further by introducing the additional 13A services in the morning for Haxby residents needing to get to work.

Pictured: Julian hosting a public meeting in Haxby for residents to voice their concerns about the No.13 service with First representatives.