Julian today used Questions to the President of COP 26 in the House of Commons to ask the government to use the summit to promote the vital role cutting-edge science like gene editing can play in ensuring sustainable production and combating global warming. Britain is hosting the COP 26 climate change meeting of world leaders

I could not begin this column without paying tribute to my former colleague Sir...

This morning in the House of Commons, Julian questioned the Health Secretary regarding the... 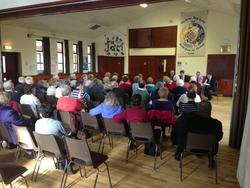 After a long campaign to improve bus services in the constituency and across the City of York, Julian Sturdy welcomed First’s announcement that they will be reviewing their full York Bus network and consulting widely with local residents.

“In October last year First made a number of changes to their bus network, which saw some services being dramatically reduced in frequency. As a consequence I met with a number of residents affected by last October’s changes and hosted a public meeting in Haxby to give local residents the opportunity to air their concerns with representatives from First. Following the meeting I have continued to lobby First to ensure they carry out an extensive review of their services which is what local residents have been calling for.”

This week, First publicised their plans to carry out the review Julian has been lobbying for, by announcing a series of drop-in consultation sessions across the York area.

“I’m delighted to hear that First are going to review their services and I really hope they listen very carefully to local residents throughout their consultation sessions, to ensure that their services can be improved for the benefit of all. At the same time, I would encourage all York residents to try to go along to one of the drop-in sessions and have their say. After a long campaign to improve bus services across York, I look forward to seeing what changes will be made by First in light of the consultation.”

First will be hosting the following consultation drop-in sessions: