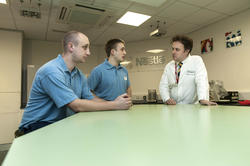 Julian has welcomed today’s news of a fall in unemployment both locally and nationally. The Office for National Statistics have announced that the unemployment rate fell to 6.2% (or 2.02 million people) in the three months to the end of July, the lowest it has been since 2008. The ONS stats also showed that the number of people claiming Jobseekers Allowance (the standard unemployment benefit) fell to below one million for the first time in six years.

“I am absolutely delighted with today’s announcements on the fall in unemployment both nationally and here in York. The Conservative-led Government’s long term economic plan is working, not just in London and the South East, but also here in God’s own county and across the UK. In York, unemployment has more than halved in the past two years and I’m really pleased that the constituency of York Outer, which I have been so privileged to represent since 2010, has one of the lowest rates of unemployment in the Country at 0.8%.

“However, we must not be complacent and I will continue to do all I can to facilitate further economic growth and job creation both in York and across the region. In the meantime, I sincerely hope these new figures, which show that unemployment is down to 6% in Scotland, will be at the forefront of voters’ minds tomorrow when they enter the polling stations to decide on the fate of our great family of nations.”