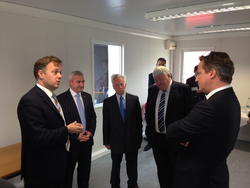 Julian has welcomed the recent news that the Conservative Party has pledged to end the subsidies for onshore wind power if elected to a majority Government next year.

He has campaigned against a number of large scale wind turbine proposals in the York area, including two proposals currently being considered at Murton Moor and Kexby. He’s also a vocal opponent of the City of York Council’s draft Local Plan which proposed over 40 areas of search for wind farms around the City.

In a letter sent to Conservative colleagues, Michael Fallon MP, the Energy Minister announced that within it’s first six months, the next Conservative Government will:

End any additional public subsidy of onshore wind beyond what is already planned in the pipeline;
Amend planning policy to give even greater protection to locally valued landscape, heritage and other concerns.

Mr Fallon claimed that the Conservatives remain committed to cutting our carbon emissions and supporting renewables as part of a ‘balanced energy mix’. However, he acknowledged the unpopularity of wind farms with local communities and said that the Government would meet its 2020 EU renewable energy targets with the projects currently in the pipeline, making further subsidies unnecessary.

Julian, who in Parliament earlier this month called on the Government to review onshore wind power subsidies and rebalance them in favour of other renewables, has welcomed the announcement. He said:

“I’m really pleased that the Party has taken on board my concerns and those of a number of my colleagues who support renewable energy but fear that onshore wind power has for too long been given a hugely unfair advantage. And I’m glad that we’re now one step closer to achieving a truly balanced energy mix. I hope that by removing these plush incentives for landowners and developers our rural communities will no longer have to live in fear of these monstrous turbines, which only create a paltry and intermittent energy supply in spite of the distress they cause.”

Pictured: Julian pictured with talking to the Prime Minister who is thought to have been considering a moratorium on wind turbines for some time.