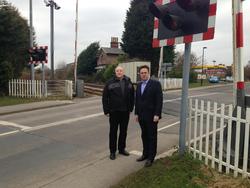 Julian has welcomed the announcement that Haxby & Wigginton Station could still be in line for government funding but expressed his disappointment that the City of York Council’s bid has not been successful in the first round. However, he has pledged to continue fighting for a Haxby & Wigginton station, which he believes could benefit residents tremendously.

Working with Rail Future, Julian has been campaigning tirelessly for a new station at Haxby as part of his wider campaign to tackle York’s transport issues. After considerable effort by campaigners and a government announcement that £20million would be made available for new stations, the City of York Council submitted an application for funding to Network Rail.

The Secretary of State for Transport has given the green light for three stations to be granted funding and announced that further funding will be available at a later stage. Network Rail have written to the City of York Council to clarify certain details and suggest improvements before their Haxby Station proposals will be given proper consideration.

On the announcements, Julian said:

“I was disappointed to hear that the Council’s application was not quite up to scratch to achieve funding for a station at Haxby in the first round. The government have set aside £20million as a fantastic opportunity for local authorities to try to improve transport links for the more isolated communities under their jurisdiction. Despite there being so many good arguments to be made for a Haxby & Wigginton station, the Council have not yet succeeded in convincing Network Rail.

“I, for one, will continue fighting for a new station as I believe it would benefit my constituents enormously. I am meeting with Transport Ministers to discuss Haxby & Wigginton station in greater detail and I will do all I can to convince them of its many merits. In the meantime, I hope the Council are working with Network Rail to bring their funding application up to scratch.”

Pictured: Julian with Councillor Tony Richardson near the proposed site for the new Station.