Statement on the death of the Duke of Edinburgh

A moment of sorrow for the entire nation, as we mourn the loss of the Duke of Edinburgh. My thoughts are with the entire Royal Family today, but especially the Queen who was married to Prince Philip for over seven decades. It is always a tragedy to lose your partner and I offer my utmost

The House of Commons Environment, Food and Rural Affairs Select Committee on which Julian...

Julian has welcomed the announcement that York will receive £2,965,522 to support iconic cultural...

Since my last weekly vaccine update, family and friends have been able to enjoy... 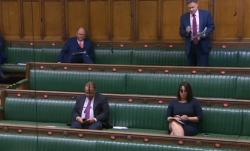 During last night’s consideration of House of Lords proposed changes to the Agriculture Bill, Julian spoke and voted against the government to demand stronger guarantees on the protection of UK food standards against lower-grade imports in future trade agreements, while also supporting sensible improvements made by the government to the overall Bill.

The Agriculture Bill creates the first independent UK farming and environmental policy for 47 years, as these matters have largely been decided at European level during the period of EU membership. The return of these powers is one of the most significant results of the Brexit process.

While considering the Bill, the House of Lords proposed amendment 16, mandating that products imported into the UK could not be made to lower standards than those expected of British food producers. The government was elected in December 2019 on a commitment to ensure future trade agreements do not compromise Britain’s world-leading food standards, and Julian joined 13 other Conservative MPs in voting against the government and for retaining amendment 16, on the basis that consumers and UK producers need a reassuring concrete legal commitment that standards will not be undercut, putting the manifesto promise into law.

However, Julian supported the government’s improvements to the rest of the Bill, thanking Ministers for introducing amendments to oblige Ministers to report to Parliament on national food security every 3 years rather than every 5 as first suggested, a change he called for at the Bill’s first parliamentary stage in February. He also welcomed a government commitment to a public consultation this autumn on regulation of gene editing techniques, the mistaken labelling of which as GM under EU rules damages UK science, and prevents the development of more sustainable farming with fewer pesticides.

After leaving the Commons chamber, Julian said: “Although the amendment was defeated, as it was when we made a similar stand in May at the Bill’s Commons Report Stage, I hope the continued resistance on clear legal guarantees for UK food standards by me and Conservative colleagues should embolden the House of Lords to again insist on tougher protections, which the government will have to respond to in the House of Commons again. I will certainly continue to press the government to make good on their commitments on food standards on behalf of my constituents, and North Yorkshire’s important farming sector and environmental assets.

I still strongly support the government on the overall thrust of the Bill, vital for creating an environment and farming policy tailored to UK interests as part of Brexit, and welcome the fact Ministers continue to improve this draft law in other areas I have suggested, such as closer monitoring of food security.”