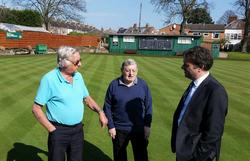 Julian has visited the York Railway Institute and discussed the future of the club with both management and local residents.

The Railway Institute was founded in 1889 and now has over 3,000 members across the city. Julian received a tour of the sports centre on Queen Street, the sports pitches at New Lane, the bowling greens in Holgate, and the Pikehills Golf Club at Copmanthorpe.

In the final weeks of Parliament, Julian voiced his concerns about recent Treasury changes that could impact on the future of the club. Responding to Julian’s concerns, the Leader of the House, William Hague, assured him that the Government had enabled York Council to support the club and allow discretionary rate relief. Following the Government’s response and yesterday’s visit, Julian is reassured that the Railway Institute will be able to provide excellent services for many years to come.

Julian said “It was great to meet the dedicated people who invest so much time and hard work into supporting this historic institution, which has provided so much enjoyment for generations of York residents. If I am fortunate enough to be re-elected, I will continue to champion this fantastic institution and will do all I can to ensure York continues to enjoy the very best sports facilities.”