On Friday, Julian visited a site south of the Designer Outlet in Naburn earmarked for a 15 pitch Travellers’ Camp in the Council’s controversial Local Plan.

Julian was given a guided tour of the site, which is Council-owned land, by local farmer Roger Jewitt, whose family have been farming the land in question for more than 50 years. Mr Jewitt still farms the land and has use of the buildings on the site. They were also joined by the Chairman of Naburn Parish Council, Cllr Laurie Gunson.

Since the proposal was first put forward in the ‘Local Plan Publication Draft’ in September, it has attracted fierce opposition from Julian, Parish Councillors, local residents from Naburn and Fulford, alongside McArthur Glen who own the nearby Designer Outlet.

Last month, Julian hosted a public meeting alongside both Naburn and Fulford Parish Councils, in which over 100 concerned local residents voiced their fears over the impact the site would have on the villages and the open greenbelt countryside surrounding them.

Following his tour of the site Julian said: “It is clear from seeing the site first-hand how completely inappropriate this location is for Gypsies, Romas and Travellers. Not only is it slap bang in the middle of the greenbelt, which national planning policy says is unacceptable, it is also far too close to one of York’s most successful retail sites. There is no logic whatsoever to this allocation, other than that, as Council-owned land, the authority have a willing landowner. They absolutely must look again at their Traveller accommodation needs assessment and withdraw this ill-thought through proposal as soon as possible.” 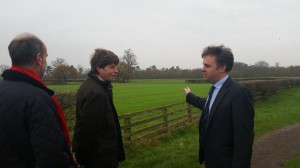 Local farmer, Roger Jewitt added: “This is prime agricultural land and within the Green Belt and we should all be protecting this from development.  The Government’s Policy for Travellers Sites states that the development should not be approved in the Green Belt except in exceptional circumstances – and there are no exceptional circumstances that would warrant the change in Green Belt status as detailed in the National Planning Policy Framework. York City Council should only be considering brown field sites for such purposes.”

Parish Council Chair, Laurie Gunson said: “If this site were to go ahead, the number of travellers allowed would total nearly 40% of the existing population of the village of Naburn. We do not have the facilities, nor the space at the local school for these numbers and the Government make it very clear in their ‘Planning Policy for Travellers’ Sites’ that a site should not dominate the nearest settled community nor place undue pressure on the local infrastructure.

“We would also question York City Council’s analysis of the number of Travellers pitches required. York already has in excess of 300% more pitches per head of population than either Leeds or Sheffield. When looking forward, based on the national requirement for pitches, York should need no more than 12 pitches on a pro rata basis and not the 68 that York City Council are proposing.”

Pictured: From left to right in both pictures, Cllr Laurie Gunson, Roger Jewitt and Julian Sturdy MP on the site proposed for 15 Traveller pitches in Naburn.