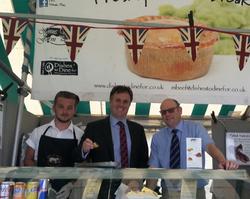 As the elected Chair of a new All Party Parliamentary Group for Rural Business, Julian also took the opportunity to visit several of the stands where local countryside organisations and companies were on show.

One such stand was for “Dishes to Dine For” – a new branch of a family run farm by Mark and Sally Darley and their two children, which has extended into the well-loved market of homemade pies.

As beef farmers, Mr and Mrs Darley claim to have “endured the turmoils of the British beef industry over the last two decades”, which ultimately led them to diversifying away from just the primary production of beef. The pies were traditionally sold to enable customers to sample their beef, but very quickly out ran the fresh meat sales, creating a new opportunity which the family seized upon. Since then they have been going from strength to strength, launching a beef ready meals range to rival their pies. 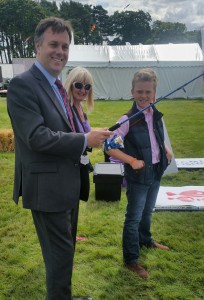 Julian also enjoyed taking part in an angling game run by a charity which seeks to introduce troublesome teenagers to fishing as means of occupying their time with a productive hobby.

“I was delighted to be able to spend the day at this fantastic event, which brings our local rural communities, charities and businesses together and really shows what the countryside has to offer! It was great to talk to some local businesses and to find out about the success stories that are driving the economy forward in our region. It was a great day out, which my family enjoyed just as much as I did, and we’re looking forward to going back next year!”