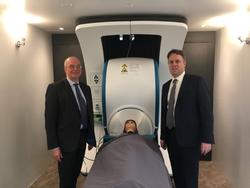 Julian recently visited York Instruments, a new advanced manufacturing company with a particular focus on advanced medical devices based at the York Science Park in Heslington.

He viewed their main product, a next-generation MEG brain scanner, and discussed the company’s plans for regional expansion. York Instruments only dates to 2015, and already sustains 41 high-skill jobs in the city, after attracting over £10 million of private investment from the United States. The company wants to proceed with further investment in manufacturing and research in the York area.

For its work on the MEG scanner, in October last year York Instruments won a Business Start-Up Award from the Institute for Physics, presented at a reception at the Houses of Parliament.

After his visit Julian said “It was fascinating to see how this local enterprise is developing cutting-edge medical technology, for which there is huge demand in this country and around the world.

It is hugely impressive that York Instruments has been able to secure substantial overseas investment in our city. Growth in high skill employment of this kind is vital if we are to secure a more prosperous future and new opportunities for our children and grandchildren.

I am particularly encouraged by the fact the founders of this company met at the York Neuroimaging Centre at York University. Getting the research output from universities onto the factory floor as marketable products is essential if we are to realise the full social and economic benefits of innovation, and I raised this specific point with the Minister for Universities, Science, Research and Innovation in the House of Commons in October.

Our local council and the government need to be backing new enterprises of this kind all the way, and making it as easy as possible for them to expand. Over the last year I have repeatedly pushed Ministers on the need for the government to fulfill its manifesto commitments to raise UK research and development spending and improve technical education to create more skilled jobs, and after seeing York Instruments in action I will redouble my efforts on this front.”