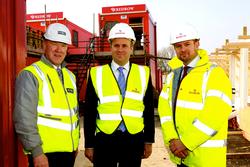 The 15-acre site is being developed on the former Grain Stores site in Water Lane, Cilfton Without, by Redrow Homes.

The majority of homes offered will be three and four-bedroom family homes with a small number of one and two-bedroom properties, including some apartments. NHBC, a leading warranty and insurance provider for new homes in the UK, will ensure that each property benefits from its 10 year Buildmark warranty.

Formerly part of the RAF base used for fighter and bomber command activities during the Second World War and then as a maintenance facility, the old aircraft hangers were later used for the storage of grain from surrounding agricultural land and came to be known as York Grain Stores.

Redrow has chosen to name its new development The Granary and it is due to launch in November 2016, with show homes opening early next year.

Julian said “It was a pleasure to visit The Granary, still known to many as the old Grain Store Site, to see how the development is progressing. It is fantastic that this key brownfield site has finally come forward for housing and it is good news for York residents that it will deliver a mix of much needed high quality family homes.

“Brownfield sites like this one are key to fulfilling York’s housing need whilst protecting the character and beautiful setting of our great city.” 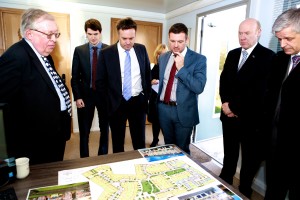 Geoff Egginton, Regional Director at NHBC, said: “We are delighted to be able to show Julian this great development, built by an excellent builder which is providing much-needed new family homes for the people of York

“NHBC works closely with housebuilders to support the delivery of high quality homes. We also work with MPs to develop and promote good housing policy”