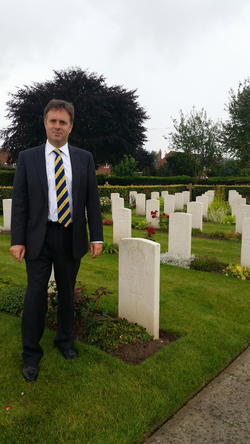 Today Julian visited the war graves of over 200 soldiers who died in the First and Second World Wars.

Julian made the visit to Fulford Cemetery on Fordlands Road with Stephen Liversage, the Northern Regional Supervisor for the Commonwealth War Graves Commission. Speaking outside the cemetery, Mr Sturdy emphasised the importance of remembering a key part of our national heritage.

“For me the centenary of the outbreak of the First World War is a time for reflection and remembrance. We must do our best to make sure that the lessons of the War are passed down to future generations. I would encourage all local schools to visit the Commonwealth war graves around York so that our children can better understand the immense scale of the conflict and the personal stories of those involved.

“It is impossible to underestimate the impact the First World War has had on today’s society. Visiting the graves of our fallen soldiers is a simple but powerful way of commemorating the outbreak of the War. We will always be indebted for their courage and bravery, which secured our lasting freedom from tyranny. Their sacrifice must never be forgotten.”

The Commonwealth War Grave Commission commemorates 1.7 million Commonwealth servicemen and women who died in both world wars. There are over 170,000 Commonwealth war graves in 13,000 different locations throughout the UK.  All casualties are treated equally, irrespective of rank, status, race or religion. The organisation also maintains the records of those who died in the world wars, which remain freely available to the general public.