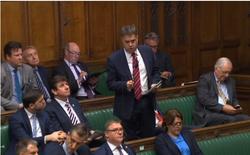 Julian has today pressed Theresa May at Prime Minister’s Questions on the progress of devolution for Yorkshire following the government’s rejection of a One Yorkshire proposal earlier this year.

It follows on from a meeting that Julian held with Jake Berry, the Minister for the Northern Powerhouse, in which he discussed ways in which devolution could work for York, including by leading the way in delivering a York and North Yorkshire deal.

In the House of Commons Julian asked:

“One of the biggest restraints on what is a very positive economic story in York and North Yorkshire is the lack of progress on devolution.

Following the rejection of the One Yorkshire proposal, does the Prime Minister agree with me that we need to have a more local approach, such as a York and North Yorkshire deal to rival those of the big urban centres.”

In her response, Theresa May said that she fully recognises the strength of local identity and the desire for devolution in Yorkshire. She went on to confirm:

“The Communities Secretary has now met with Yorkshire leaders, discussions are continuing about a different localist approach to devolution and officials are having initial meetings with councils including York and would be interested in hearing their ambitions for devolution.”

After leaving the House of Commons, Julian said:

“It is reassuring to hear the Prime Minister say that the government is continuing to engage with Yorkshire leaders, and want to agree a solution that reflects the needs of our region.

However, there is clearly still a lot more work to do in this area, and it is vital for local representatives like me to keep the government focused on delivering for our part of Yorkshire on this. If a wider Yorkshire deal cannot work, then we need to think practically and see what York and North Yorkshire can do independently to make urgent progress. I remain in close and regular contact with Ministers on this evolving issue.

Fundamentally, the transfer of powers back from London will give us more control of our own future in terms of transport, infrastructure, and supporting local growth, allowing the kind of progress made by areas that have agreed devolution settlements like Manchester and Birmingham.

Regional business leaders have stressed the importance of clarity on the shape of devolved powers for unlocking new investment and job creation, and our city cannot afford to miss out on these opportunities.”

A video of the question can be found here