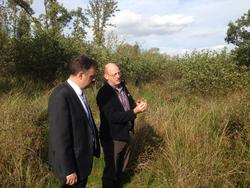 Julian has joined forces with the Yorkshire Wildlife Trust to campaign against a proposal for up to 600 new homes close to the Askham Bog Nature Reserve.

The City of York Council’s Local Plan Publication Draft proposes to remove 42.5 acres of land from the greenbelt to the south of Moor Lane, Woodthorpe and ‘safeguarded’ it for the future development of up to 600 homes.

Julian was recently given a tour of Askham Bog by Louise Wilkinson, Public Affairs Manager and Dr Rob Stoneman, Chief Executive of the Trust to discuss the potential impacts of the development on the ecology of the site. Given that the nature reserve is very special in many ways, part of the problem they discussed was that the development posed too many unknown threats to the site.

The Trust and Julian have agreed to work together in campaigning against the proposal on the grounds that it risks doing too much harm to one of the most important nature reserves in the County.

Following their meeting, Julian said: “It was a real pleasure to meet with Dr Stoneman and his colleagues and to be given a tour of this absolutely fascinating site. Every time I visit the Bog I’m reminded of what a special place it is and I would hate to think that it could all be put at risk by completely thoughtless development. When the need to protect Askham Bog is considered alongside the obviously detrimental impacts the Moor Lane site would have on the greenbelt and local infrastructure, the Council absolutely must remove it from their Local Plan. For me it is a ‘no brainer’.”

Similarly, the Yorkshire Wildlife Trust expressed their delight at meeting up with their local MP for York Outer at Askham Bog Nature Reserve, in whose constituency are also the wildlife gems of the Heslington Tillmire, Wheldrake Ings and Strensall Common.  The Trust added that few MPs can be lucky enough to have so many amazing wildlife sites in one constituency reflecting the incredible wildlife that surrounds York.

Rob Stoneman, Yorkshire Wildlife Trust’s Chief Executive said: “In 1946, the renowned chocolatiers Rowntree and Terry joined forces to protect one of the greatest wildlife sites in Yorkshire from the threat of housing development by buying Askham Bog.  In turn, they founded the Yorkshire Wildlife Trust to look after the site which today manages a further 95 sites across all of Yorkshire.  Askham Bog is as special today as it was then and faces a new threat from housing south of Moor Lane.  We are delighted that Julian and thousands of other York residents are passionate about protecting Askham Bog long into the future. Land south of Moor Lane should be greenbelt and we call on York City Council to take the opportunity it now has to modify its plans to remove the threat to Askham Bog and declare that land greenbelt in the Local Plan.”

Tomorrow (Saturday 8th November), Julian will be hosting a public meeting on the Local Plan at Woodthorpe Primary School at 9.30am. The Moor Lane proposal is expected to be very high on the agenda for many residents, as well as the Compressed Natural Gas Fuelling Station and Freight Consolidation Centre at Askham Bryan and the impact these too sites will have on Askham Bog, the greenbelt and the local infrastructure in Woodthorpe.