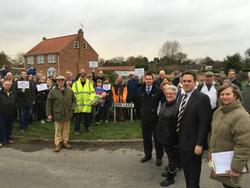 Julian has joined forces with York Councillors Paul Doughty, Sian Wiseman and Helen Douglas, Parish Councillors and local residents from Stockton on the Forest to protect one of the village’s vital links to the A64.

Under current proposals put forward by the Highways Agency and their contractors A-one+, supported by the City of York Council, Barr Lane is to be put through a trialled closure beginning in February. The road is used by many of the residents in Stockton on the Forest as the main connection point onto the A64.

Concerns have been raised by the Highways Agency and their partners over the safety of the junction, following accidents and one fatality in recent years. However, local residents and their representatives are adamant that the Hazelbush crossroads, which the Agency are suggesting as an alternative route, is far more dangerous and has seen many more accidents.

This is particularly true in the summer when villagers report that road traffic accidents are almost a weekly occurrence. The Hazelbush crossroads are also invariably congested and with traffic likely to worsen as a result of the trial, there is a fear that as road users’ patience wains, temptation will lead to an increase in accidents there.

The scheme is due to commence on 23rd February and will involve the installation of a 500m barrier along the westbound verge of the A64, which will be continuous over the junction of Barr Lane. Consultation will take place once the trial begins, as part of the Traffic Regulation Order, but residents are calling for earlier discussions with the community to decide whether or not to proceed with the trial in the first place. 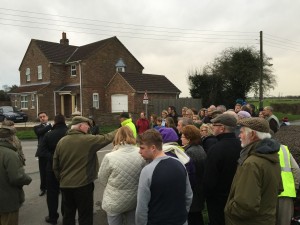 Commenting, Julian said: “I am extremely disappointed with these proposals from the Highways Agency and their partners, including the City of York Council, which will see the mass of local knowledge from the very people who live in village completely ignored. I have written to the Highways Agency’s Regional Director and the Transport Minister, Robert Goodwill MP, who I know has used the road himself, to urge them to reconsider the proposal.”

Local ward Councillor, Paul Doughty added: “I was told by a City Council officer that the experimental closure needed to be in place before the end of March due to funding timescales. This should not be the motivation for this experiment and it is wrong that any trial would be imposed in advance of meaningful consultation with villagers. The closure of Barr Lane is against the will of local residents. I urge the Highways Agency to think again and concentrate efforts and funding on making the Hazelbush/Towthorpe crossroads a safer junction instead.”

Stockton on the Forest Parish Councillor, Rosey Dunn said: “The Parish Council were not made aware of the proposal to close the road until recently, but have since seen an unprecedented response from local residents, with nearly 40 in attendance at our most recent meeting. The vast majority of residents use Barr Lane over Hazelbush because it is much much safer. The Parish Council will strongly oppose this trial until a much safer alternative route is put forward.”

Local resident, Robert Palmer commented: “I’ve been absolutely taken aback by the heavy handed approach of A-one+ and the Highways Agency. They quoted City of York Council opinion that Stockton residents would likely support this action.  How wrong could they be!  So far A-one+’s attempts at public consultation have been minimal – they would not even attend a recent Stockton Parish Council meeting to outline their plans and reasons, though they were invited in good time.  The alternative A64 junction is the notorious Towthorpe Lane/Hazelbush Road cross roads, which is inherently much more dangerous than Barr Lane and the number and severity of accidents substantiate this.

“How could the A1+ engineers be so out of touch with local road conditions to propose this change before any substantive improvements are made to the Towthorpe cross roads?  The Barr Lane junction may well be substandard in the eyes of A-one+ but it is much safer than the Towthorpe junction.  Many residents refuse to use the Towthorpe cross roads because of its danger, so if Barr Lane closes they are even less likely to use the Towthorpe junction when it is carrying more traffic than today.  The painting of yellow boxes across the Barr Lane Bridge, which prohibit entry unless the exit is clear would maintain access into Barr Lane at all times from the A64 and in fact enforce what is current practice by locals.” 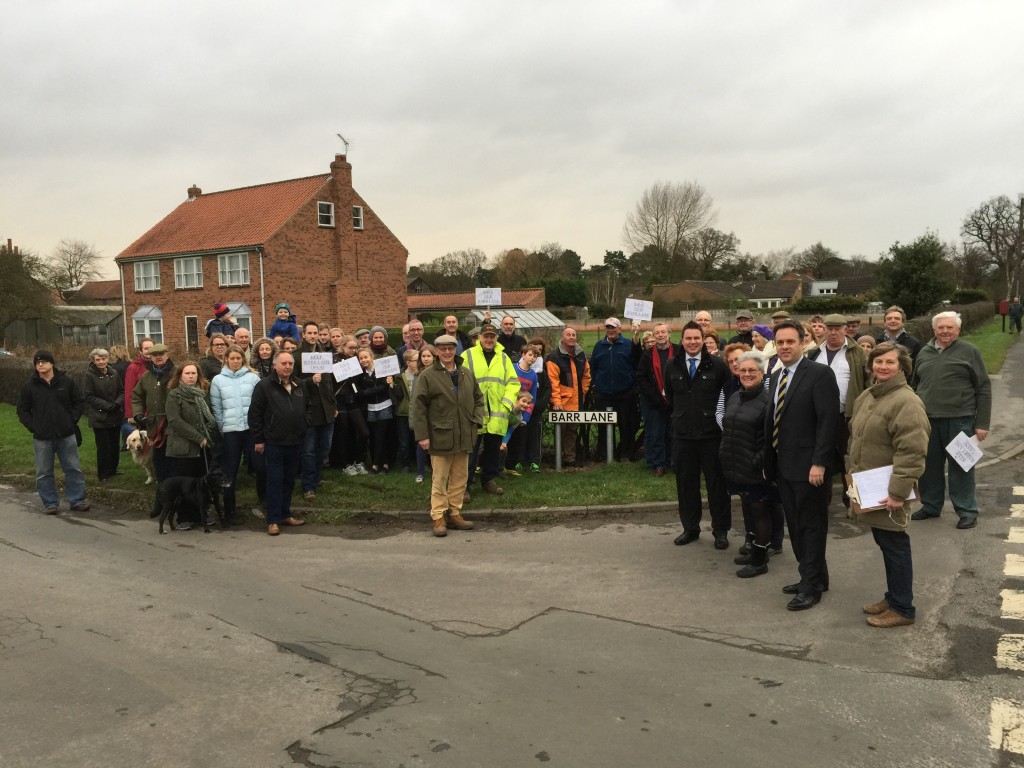 Pictured above: Julian, with Councillors Paul Doughty, Sian Wiseman and Helen Douglas, as well as several Parish Councillors and approximately 50 local residents protesting against the proposed closure of Barr Lane. And Julian addressing the group.