Julian Supports Play For All Project in Wigginton 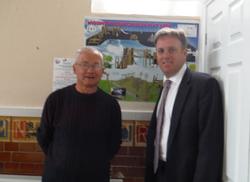 Julian has recently met with the Churchfields Open Space Committee (COSC) in Wigginton to look at their plans for a major upgrade of the playground equipment on the site.

The COSC’s Play For All Project aims to provide three new pieces of equipment, a pathway and seating together with the necessary safety surfacing. The Committee aims to raise £66,500 to fund the project and has so far banked almost £30,000 through grant applications and local fund raising efforts.

The project has also been shortlisted for the Lloyds Bank Community Fund and could be in line for an award of £3000 if it secures the most votes, which the COSC feel would be a ‘terrific boost’ towards achieving their target. Three further grants of £2000, £1000 and £500 may also be up for grabs.

“It was a real pleasure to meet with members of the COSC to discuss their fantastic plans for a much needed refresh of the playground equipment, which so many of my constituents will benefit from. Having seen first hand their enthusiasm and drive, I have little doubt they will eventually reach their target of £66,500 to complete the Play for All Project.

“It’s great to see their efforts have been recognised by Lloyds Bank and I really hope they are successful in securing this £3000 award, which will see them one step closer to reaching their fundraising goal. I encourage all residents in Haxby and Wigginton to visit www.lloydsbank.com/communityfund as I have done and vote for the Churchfield Open Space Committee’s Play for All Project before the 10th October deadline.”

From 14th October to 31st January 2015, the Churchfield Committee will also be looking for donations through Local Giving’s ‘Grow Your Tenner’ scheme, part funded by Government, which will see sums of up to £10 match funded by the scheme. Please visit Local Giving’s website for more information or the Play For All page to make a match funded donation to the project from 14th October.

Pictured: Julian at Wigginton Village Hall viewing the Play For All Project plans with the Churchfields Open Space Committee.