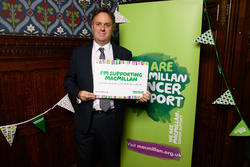 Julian showed his support for Macmillan Cancer Support on Wednesday 24 October by attending the World’s Biggest Coffee Morning event in Parliament. This year’s event focused on the challenges that people can face at different stages of their cancer experience.

Following the success of Macmillan’s biggest fundraising event of the year on Friday 28 September, which saw thousands of people come together across the country, the charity hosted a parliamentary Coffee Morning at which MPs and Peers had the opportunity to meet with and hear from people living cancer.

Speaking at the event, Macmillan Chief Executive Lynda Thomas set out how the charity is implementing a new strategy to help meet the growing needs of the increasing numbers of people living with cancer.

“Macmillan’s World’s Biggest Coffee Morning is a fantastic annual fixture in the parliamentary calendar, and I was pleased to show my support at the event once again.

“The focus of Coffee Morning has always been encouraging people to get together and talk about all the issues people living with cancer have to deal with. This year’s event provided a really important opportunity to hear more about the financial, physical and emotional challenges that people can face after finishing cancer treatment.

“I was also interested to learn more about the support that Macmillan offers to people affected by cancer. It was encouraging to hear about how Macmillan supports people to live it in the best possible way.”

Having raised over £27 million in 2017, the World’s Biggest Coffee Morning is Macmillan’s biggest fundraising event of the year – and there is still time to get involved.