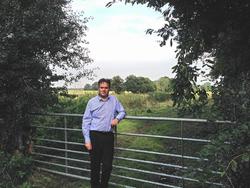 Julian has welcomed the Environment Secretary’s decision to introduce tougher sentences for cruelty to animals, and plan for the introduction of a deposit return scheme for plastic bottles.

Michael Gove announced these measures on Monday in his speech to the Conservative Party Conference in Manchester. He said the government would increase the maximum prison sentence for animal cruelty from 6 months to 5 years, a ten-fold increase that will ensure the courts have the powers they need to deal appropriately with the worse cases of animal abuse.

He also announced a month-long consultation to inform the creation of a deposit return scheme for plastic bottles. Over 8 million tonnes of plastic enter the world’s seas each year, harming marine life and polluting water and coastlines.

The Environment Secretary emphasised that the government would pursue a “Green Brexit,” using the greater freedom the UK will have outside the EU to implement world-leading policies on animal welfare, conservation and farming, ensuring the highest standards. He suggested that leaving the single market would allow the government to consider doing things like restricting the live export of animals, which cannot be done under current EU rules.

Speaking after Michael Gove’s speech, Julian commented: “I am very happy the government has decided to introduce stricter penalties for vile acts of animal cruelty, and to pursue plans to make it easier to recycle plastic bottles, and thereby protect our precious marine environments. A number of constituents have contacted me over the past year to express support for tougher animal cruelty sentences and ending live animal exports, and I have previously acted to raise a deposit return scheme for plastic bottles with Ministers on behalf of local residents. I strongly support these proposals, which I know will be welcomed by many people in York Outer.

I was also glad to see the Environment Secretary’s commitment to using the opportunity of Brexit to devise better policies on conservation and agriculture, and I will be looking to scrutinise these in detail in my role as a member of the Environment Select Committee of the House of Commons.”