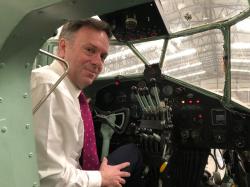 After a difficult two years due to lockdowns and restrictions, Julian enthusiastically supported Visit Britain’s English Tourism Week which aims to shines the spotlight on an industry which supports millions of jobs and local economies right across the country.

In York, Julian was spoilt for choice for attractions to visit but opted to tour Yorkshire Air Museum to hear about their ambitious plans for the future. Alongside the hospitality and leisure sector grants, Yorkshire Air Museum has also successfully bid for £312,000 from DCMS’ Cultural Recovery Fund and £134,000 from National Lottery’s Heritage Fund during the pandemic which has enabled them to navigate prolonged closures while still planning to open an education centre as well as expanding into a second hangar allowing them to display more aircraft.

From April 2nd, visitors will be able to learn about the role aircraft played in the Falkland’s War as part of a new exhibition. Julian got a sneak preview as his visit coincided with the delivery of an ex-Royal Navy Lynx helicopter, arriving on loan from a Selby firm, Jet Art Aviation. Jet Art Aviation have restored the Lynx – a Falkland’s veteran – and have let Yorkshire Air Museum have it to display for the duration of the Falkland’s Air War exhibition.

As well as a tourist attraction, Yorkshire Air Museum features memorials to the flight crew who were based at RAF Elvington during the Second World War. Initially, 77 Squadron Royal Air Force was based at Elvington including aircrew from Canada, New Zealand, South Africa and Australia but after they were transferred to Full Sutton two French squadrons were based at the airfield for the remainder of the war. These international links remain to this day with representatives from these countries often visiting on Remembrance Day to pay respects to the airmen made the ultimate sacrifice during the war.

Following the visit, Julian reflected on the region’s tourism sector:

“While it seems York has bounced back stronger than ever from the pandemic and the city is as busy as ever, it is important we do not get complacent and we continue to encourage tourists to return to support local businesses.

In 2019, the overall economic benefit of tourism in Yorkshire was estimated to be worth £9 billion to our regional economy supporting 224,000 jobs, so clearly we must do all we can to show that York is open for business to ensure the last two years will only be a momentary dip.

It was fantastic to hear the exciting plans that Yorkshire Air Museum have to expand their site and offer more to visitors. It is easy to see why it is a favourite attraction for many families and I am sure their new Falkland’s War exhibition will be a hit.

The next few years should hopefully see more investment in York’s tourist sector, with the expansion of the National Railway Museum and the development of the Roman Quarter adding an extra boost to our city’s first-class reputation among tourists.

As residents we must not forget what we have on our doorstep and I would encourage everyone to visit the Air Museum as well as all our city’s other attractions to learn more about our history and have fun with the family!”

Yorkshire Air Museum thanked Julian for his interest in their work, commenting:

“It was great to welcome Mr Sturdy here today and show him what are working on at the moment, particularly our new Falkland’s exhibition. We were able to show him how passionate we are about aviation heritage; preserving history and keeping it alive for future generations.”