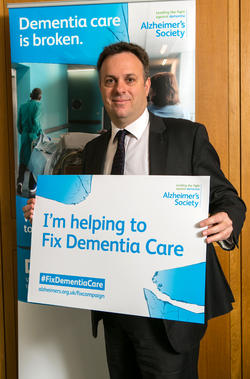 Last week in Parliament Julian attended the launch of the Alzheimer’s Society’s new campaign ‘Fix Dementia Care’, which calls for improvements in hospital care for people living with dementia.

The event called for greater transparency across the NHS following an Alzheimer’s Society investigation which found that too many people with dementia are falling while in hospital, being discharged at night or being marooned in hospital despite their medical treatment having finished.

Freedom of Information requests (FOIs) carried out by the charity found that in 2014-15:

In the worst performing hospitals, people with dementia were found to be staying five to seven times longer than other patients over the age of 65

Speaking after the debate Julian said:

“Good hospital care for people with dementia should never be a throw of the dice – yet in some hospitals people are routinely experiencing the consequences of poor care. I am sorry to say that York Hospital has yet to respond to the charity’s FOI request, therefore I will be writing to them personally asking for this information to be provided.

We need to end the postcode lottery on the quality of hospital care people with dementia face. The first step to improving this issue across the country is greater transparency – once we know where the shortcomings are we can take steps to tackle them.”

The campaign is making the following recommendations to fix dementia care, firstly that all hospitals publish an annual statement of dementia care, which includes feedback from patients with dementia, helping to raise standards of care across the country. Secondly, the regulators, Monitor and the Care Quality Commission should include standards of dementia care in their assessments.