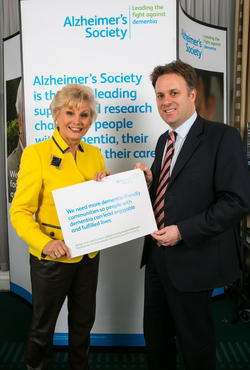 This week Julian pledged to support the 850,000 people living with dementia across the country. Julian joined over 200 other MPs and representatives from Alzheimer’s Society in Westminster to meet people with dementia and commit to support those affected by the condition.

Julian said: “We all have a part to play in improving the lives of people living with dementia. There are around 2,600 people living with the condition across York and its surrounding communities and it is an issue we need to tackle head on. I am delighted that the Government has launched the world’s biggest study group for dementia, and has committed to doubling the funding for research into dementia care.”

A number of projects to improve care have already been funded, included the Dementia Friends Programme and the Dementia Friendly Environments Capital Fund. The Prime Minister used an international summit last month to set out what reforms he wanted to see in place by 2020. He announced that England will be the best country in the world for dementia care and support for families and carers. Plans were also announced for England to become the global leader in undertaking research into dementia and other neurodegenerative diseases.

George McNamara, Head of Policy and Public Affairs at Alzheimer’s Society said: “Dementia is the biggest health and care challenge our country faces – one that all of society must respond to. By the end of the next parliament more than a million people will be living with dementia. There is unlikely to be a family in the country that is not affected. We are pleased to have been able to engage over 200 MPs in one day. Julian has a huge influence in York and we hope he will use this opportunity to take action and improve the lives of people living with dementia.”