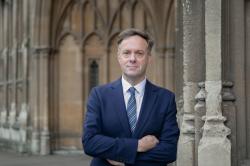 Julian has contributed a comprehensive evidence submission to the government’s consultation on development of a new Biological Security Strategy.

This refreshed plan is designed to secure the United Kingdom against biological risks, including future coronavirus-style events, animal and plant diseases, biological warfare, and antibiotic resistance.

Julian was asked to submit in his capacity as long-term chair of the All-Party Parliamentary Group on Antibiotics, given his lengthy engagement on the antibiotic resistance threat.

Antibiotic resistance is a serious public health challenge, with the potential to be even more dangerous than coronavirus.

It occurs when disease bacteria change in response to antibiotics being used against them, and become able to resist medicines, fuelled by the over-prescribing of antibiotics. This means vital treatments for common infectious diseases cease to work, with conditions like TB and pneumonia already proving harder to treat as a result. Growing of resistance could even make routine procedures like hip replacements and caesareans too dangerous.

A projected 10 million people could die globally each year by 2050 due to growing antibiotic resistance, and it is already linked to 50,000 deaths annually across Europe and North America. The UK already plays a major leadership role in the world effort on resistance, the looming threat of which has been thrown into sharper focus by the recent pandemic.

After contributing the views of the All-Party Group, Julian said: “Given the lethal looming threat of antibiotic resistance, I thought it was vital to use this opportunity to again press Ministers on upgrading our measures to tackle this.

The awful impact of covid has underlined the need for intense vigilance against future public health dangers. My submission highlighted the Group’s recent work on how resistance is built up via leakage into water systems, and  stressed we have to make decisive progress on this overall.

I expect the government to carefully consider our suggestions, and will watch to see a robust Biological Security Strategy is developed which properly protects the residents of York.”